This looked different in person…

While watching the movie War Games on Netflix the other day (yes it still holds up), I was struck by a notion concerning futility and the game of Tic-Tac-Toe. The model goes that eventually people figure out that there really is no winning the game against anyone who is aware of the simplest concepts in strategy. My daughters–Ruby and LuLu–who are 4 and 5 respectively, are still shocked by the game’s twists and turns; but most of the people I know are able to steer the game toward the inevitable stalemate finale. Dr. Falken, the only competent scientist in the movie, pontificates that this is the basic end to all games (and nuclear proliferation which was the object of said pontification), it is just more easily seen in Tic-Tac-Toe because the game lacks sophistication. This conversation, the conversation in the movie, was interesting in a very 1983 sort of way…Reagan was in the White-House and convoluted philosophical concepts were not the stuff of cinema…John Wayne doesn’t carry a book on his hip, Poindexter. But, again, the movie still holds up. I have found a new tell-tale of futility that is every bit as efficient as Tic-Tac-Toe: Taking pictures in Kaua’i in the interest of conveying, reliably, what I had witnessed. 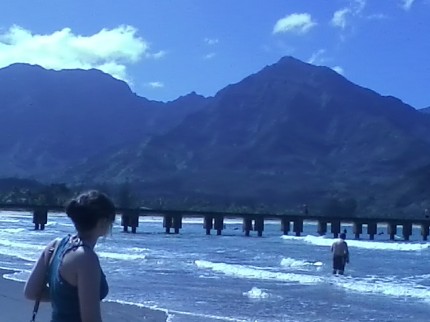 A pier and some mountains…whateves

I think that trying to capture the beauty of Kaua’i on camera is a bit like live-tweeting an alien abduction #TheProbingSoundsALotWorseThanItIs…the tools lack the necessary influence.
My friend Anna does a great job taking pictures, as does my friend Jefro and his wife Kim. I singled out these names because these are friends of mine who not only take beautiful pictures, but who’ve all taken beautiful picture on and of Kaua’i. I’ve seen some of their photos of the island, and while they are sufficiently capable of sparking one’s imagination to visit this paradisiacal locale, they still fall short of recreating the depth of its beauty. I suspect they didn’t use cell-phone cameras.
Even with a nice camera I would just set about aimlessly pointing and clicking like a kindergartener hell-bent on placing my “X” in the center square…because that’s how winners play, Charlie…that’s how winners play. Hey look, a rooster! Hey, a flower! What? Water! Hey, people…PEOPLE! Click, flash…Click, flash…Click, flash. All the time with visions of grandeur concerning a slide-show that I’ll piece together and that people will go to great lengths to avoid…it is going to be splendid! “Hey Patso, is that a picture of an omelet regurgitated in the throes of a near-death-terror-puke?” “No, that’s a sunrise.” “Oh…Because it looks…” “I know…I know.” Wow, that last paragraph was rife with ellipses. “Where does this guy get off?” You’re thinking. Where indeed…

I suspect that when my aforementioned friends walk around an island paradise they have a very deliberate method where-by they make decisions about what is worth capturing, whether or not the lighting is sufficient, and if their subjects have the patience to be still long enough to allow all of these axes (Axi?) to intersect. Or, mayhaps, they take a metric butt-ton of pictures and edit accordingly. Irrespective of their particular methods, I’m confident that they’ve faced similar frustrations to my own when trying to take a photo that accurately portrays the sense of awe and wonder that the object first inspired in them.
The ubiquitous nature of cameras these days, the technology is as democratized as it has ever been, has only served to punctuate the futility that, even in the right hands, the camera is incapable of telling the truth. It only offers an honest paraphrase.

Given all of this, one could reasonably ask the question: “Why bother with the game…why bother with pictures?”. I’m glad you asked.
My family and I, having visited the island after suspecting that God was calling us to help out with a work down there, have decided that we are going to move to Kaua’i. Some of our friends are already down there, and we’re all excited about planting a community of grace not entirely alien from the one I helped start here in Bremerton the better part of a decade ago. These are folks, who like me, take the idea of love and service seriously. And, as such, are continually disappointed by our impotence and blown away by God’s ability to be strong in our lack with regard to the topics of love and service. We are very eager for this move. We are also scared and sad, as we will be leaving the majority of our loved ones 3000 miles and two time-zones to our past. Or is it East? I’m bad with compasses. Our plan is to make this jump in the Summer, upcoming, after LuLu is finished with her school year. There will be other posts on this topic as I continue to flesh-out and process what the next chapter of mine and my family’s life will look like. Finally, I know it was a nasty trick, rambling on for paragraph after laborious paragraph only to hide this announcement at the end. “Where does he get off?” Where indeed…

What Were You Thinking?!?!